The Blind Side – Blu-Ray Review

It is tradition in our household, as I am sure it is many others, to watch all the movies (and actors) nominated for an Oscar.

This year, I was able to only catch a handful, probably as there were many entries (10 for Best Picture alone), but mostly because the 2010 Olympic Winter Games here in Vancouver were so entertaining, we never felt the need to hit the ‘input’ button on the TV remote.

The story is based on the real life events of homeless teen, “Michael Oher” (played by Quinton Aaron).  And while there is a sports background, the film deals more with how the teen finds a family in Memphis, with ‘Mom’ Leigh Anne Tuohy (Sandra Bullock) and ‘Dad’ Sean Tuohy (Tim McGraw).

The family, in turn, finds a new son and brother they needed to help them complete their lives.

Bullock’s performance is commendable, she is convincing as the struggling mother.  Having won the Oscar for Best Actor, if Bullock concentrates on rolls like this, she’s sure to obtain another nomination.

I am so glad our family tradition gets to include films such as this.

The Blu-Ray version includes some amazing extras: full DVD and Digital Copy versions of the film in the box.

The Digital Copy edition makes it easy (and legal) to transfer the movie to your portable media player (iPhone, iPod, Zune, and soon, the iPad).

Rare interview with the pro footballer whose life the movie depicts

Actors go head to head with six legendary SEC College Football Coaches come together, competition steps up both on and off the screen 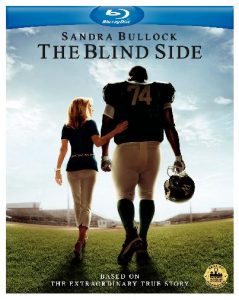