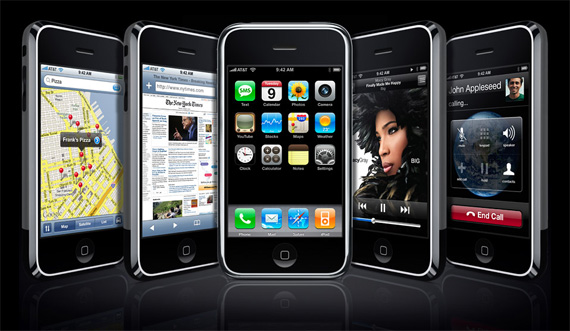 Less than 24 hours after the launch of Apple’s new toy the iPhone we know a lot more both about the product itself and it’s customers. Here’s a short roundup:

As with the launch of the PS3 evil people are exploiting the stupidity of others through eBay. Sellers are offering up fresh iPhones for preposterous prices (we found this one for $5000) and hoping for a huge return on their investment. But unlike the PS3 there is no real problem with supply so we sincerely hope no one is stupid enough to take this “deal”.

The iPhone does have a SIM card

The guys over at ThinkSecret wasted no time on this one and cracked open an iPhone mere hours after it went on sale. The images tell us many things about the new product, maybe most importantly that it does in fact have a SIM card (contrary to what WSJ’s Walt Mossberg reported earlier this week). This opens up for the possibility of unlocking the phone and using it on a non-AT&T network. Photos of the destruction can be found here.

Some people can buy the iPhone without a 2 year contract

(From Yahoo! News) The iPhone comes with a mandatory 2 year contract with AT&T. Or at least so we thought. Now it turns out the phone is being made available to customers without a 2 year contract under certain conditions – namely that they have bad credit. These customers can buy the phone at a non-subsidized rate (no one is saying how much) and get a special code they enter during the iTunes registration that lets them use the phone on a month-to-month basis.

(From Gizmodo) PureMobile are offering up unlocked iPhones for sale. It’s unclear how real this claim is but considering it is a GSM phone and you can buy it without a 2 year contract (provided you have bad credit) it’s not too far fetched.

WARNING: iPhone will not work on other networks!

Here are some things to consider if you are panning on going the unlocked and/or non-AT&T route or take the iPhone out of the country:

People are stupid part 2 (self explanatory)