Microsoft ramps up for the Holiday Season

We were invited to a small schmooze fest with Microsoft today to take a look at their offerings for the upcoming holiday season and talk about their current products. It was a nice little affair in a room on the top floor of a downtown hotel where we were presented with four different sections of the Microsoft brand targeted to the home consumer market. Stay tuned in the following weeks as we’ll post videos from the event but for now let me just give you a quick run-through of what we saw and heard. 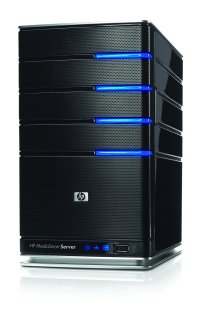 First off was the new Microsoft Home Server. This is a new software package that comes pre-installed on home server solutions from hardware manufacturers like HP. The Microsoft Home Server is a plug-and-play solution that connects to your network through a normal ethernet cable and becomes available both to all the computers and other units on your network as well as through the internet. Home Server serves two purposes; it’s a back up unit for all your computers and it’s a place to localize and share content throughout your home and make it available if you are out of your home. So who needs a Home Server? If you ask Microsoft, everyone. The product is created to address the growing need for backup, storage space and file sharing in the home environment. If you ask me I’d say anyone who has a lot of pictures, music and video on their computer and want to be able to access these files from one location rather than having to either have several copies on different computers or or using USB drives or other cumbersome media. It could also work for small businesses who are looking for a cheap and easy backup and storage solution although I think Microsoft would want them to go with a more business oriented product. Finally it will tie well in for all those of you out there who download purchase movies on-line and want to view them on your TV through your XBOX360.

Personally I wish this product had been launched about 8 months ago so I didn’t have to build my own custom backup solution on our systems at home. The rock solid plug and play capabilities and ease of use plus the expandable storage systems like the HP Home Server is a cheap and easy way of solving several problems.

Next on the list was Microsoft’s many gaming solutions. There really wasn’t much new here in terms of revolutionary innovation but we were presented with some fairly palatable updates to existing products. On the XBOX360 front there was the much talked about black XBOX360 Elite with it’s 120GB hard drive and HDMI output, the HD-DVD player that turns your gaming console into a full home entertainment system and the new pink and blue controllers that will be available in the near future. In the games department they presented two new titles: Viva Piñata: Party Animals and a multi player version of the hugely popular board game Scene It! Both of these offerings are targeted toward the family market and from what I saw I’d say they are pretty strong. 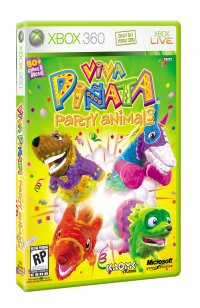 Viva Piñata: Party Animals is an action/adventure version of the on-line community game Viva Piñata which will appeal to a much larger audience. Personally I found the original to be dreadfully boring and tedious but this game looks like a lot of fun. It features 40 mini-games like speed eating and races and has lots of fun little animations and quirks. 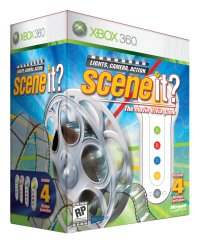 Scene It! Lights, Camera, Action is a console version of the hugely popular DVD/board game about movie trivia. It can be played by 1 – 4 people and can easily get highly competitive. All the standard Scene It! plays are included, from “find the missing piece” to “picture puzzle” to “name that movie” making it a fairly entertaining game. The only problem is that the number of players is limited to the number of controllers (so if you only have two controllers forget asking your friends to come over to play) and considering the speed at which this game can be played you wonder how long it will take before you start getting repeat questions. Nevertheless I think the XBOX360 version of this game works better than the DVD version. 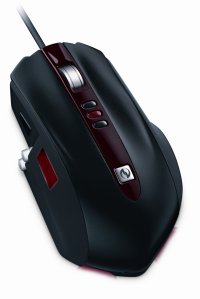 On the PC gaming front the only thing that really grabbed our attention was the highly customizable Sidewinder gaming mouse. I’ll be posting a video on this one ASAP. The mouse lets you change the weight and balance, sensitivity and even glide with buttons and accessories. I’m not much of a gamer myself but I’d like to try it out as a PhotoShop mouse because I think the sensitivity options would be excellent for designers. More on that later (meaning when Microsoft gives me one to test out).

Third up: Windows Live. We all know MSN Messenger and Hotmail and some have familiarized themselves with the MySpace alternative Live Spaces. Microsoft has made the wise choice to consolidate all their on-line offerings into one package simply called Windows Live. This all-inclusive download now gives you all the Live applications at once: Messenger, Live Spaces, MSN Mail, Photo Gallery, the blogging tool Writer etc etc. It’s pretty obvious Microsoft is feeling the pinch from Google (with Picasa, Blogger, YouTube etc) and social networking sites like Facebook so they are trying to gain some ground with this block release. The idea is that you have one login that covers everything, from your Messenger list to your blog to your email to your search preferences to your photo gallery. Whether it’ll work or not is another matter all together. But for now let’s just see where it goes. The Windows Live package was released today so jump on in and try it out. I know I will.

Last but not least was a comprehensive walk through of the security features in the new Microsoft flagship Vista. I think this presentation was designed to quell some of the fears surrounding Microsoft and security and they did a pretty good job. Vista features some very advanced parental controls which allow parents to block their kids from surfing certain sites on the web, playing certain games and even sets time limits on when they can use the computer. These are all features I know my parents would have loved (and I would have hated) when I grew up and with the enormous amount of shall we say inappropriate content available out there it is important for parents to regain some control of what happens on the home computer.
In addition to the standard security features on Vista, Microsoft now offers OneCare – coined as “All-in-one security and performance for your PC”. Basically it’s a software package containing antivirus, antispyware, anti-phishing and a software firewall along with some other tools. I have to say I find it somewhat questionable that Microsoft sells a security package when many of the security problems it fixes are caused by bad program design on their end. However much of the security problems we see on the web today such as spyware and phishing can’t be blamed on Microsoft and these are problems that have to be dealt with appropriately. The yearly subscription covers 3 pcs and is in the same price range as the competitors so I guess it boils down to who you trust your computer security to. I have yet to see a comprehensive test of OneCare versus other offerings so I really can’t give you any advice other than to try it out and see what you think. For most people any antivirus software will do the trick and a router will keep most evildoers out of your private files.

Overall it was an interesting event and it shows that Microsoft is a lot more than just spreadsheets and pie-charts like some people claim.