Slurpr – Hack every wireless network around (and go directly to jail) 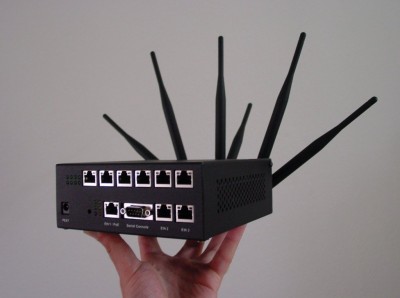 If you live in an apartment building or in a city you’ve probably noticed that when you turn on your laptop there are multiple wireless networks available – some of them encrypted, some of them locked and some of them wide open. If so you’ve probably also wondered what would happen if someone hacked all these networks and piggybacked off them rather than pay money for their own broadband connection. This would of course be illegal and immoral but be honest… it’s not like the thought hasn’t crossed your mind, right.

While the rest of us were too chicken law abiding to cross the line into someone else’s connection the guys over at GeekTechnique have taken the next step and develloped the ultimate piggyback router. The aptly named Slurpr is a wireless monster with 6 antennas, 8 LAN ports and the ability to access any and all wireless signals in your area, open them up and mash them together to create the broadest broadband available over Wi-Fi (illegaly of course).  It’s built from commercially available parts found around the net and will retail for the hefty price of 999 Euros (if it ever reaches production before the creators get slappend with a monster lawsuit).

As of now the Slurpr is merely an experiment but  if you visit Slurpr.com you can vote on your most wanted features, whether or not the creators will end up in jail and even pre-order a box to supersize your BitTorrent addiction.